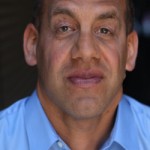 Arik Hartman was born and raised in NY, more precisely at “The Bowery”, in the southern portion of Manhattan. He is very passionate about Acting and Improv and is currently enrolled at UCB NY studying Long Form Improvisation. He began his acting career around 2008; starting off as a background actor and after taking a few acting classes and workshops he decided going on auditions and began booking featured and principal roles on television and in films.

Paradoxically as if following a “CIRCLE”, he has been to the 4 corners of the World, since he has always been fascinated about all the different people, cultures and traditions. He describes himself as a “globe trekker” or an “adventurer”, attributes that somehow keep propelling his acting drive. When not on set or in an acting class he can be enjoying a slice of pizza in Napoli, or taking a ride on a rickshaw in Mumbai, or even enjoying a Falafel in Tel Aviv.