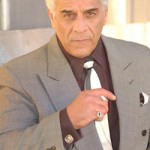 Born on August 3, 1953 in Brooklyn, New York; Dominick Mancino is the eldest of 3 sons, and currently married, with 2 grown children. He has always loved music, and can “still” dance to the likes of Saturday Night Fever, Dirty Dancing and Footloose. As a thoughtful person he is, he started acting career late so as to raise and spend time with his family. In his spare time he relaxes by fishing, bowling and woodworking; coincidentally this has been compared to the likes of Eric Estrada and John Gotti. Besides this fact, Dominick is known among family members and friends as “Big Dom” or “Hollywood”.

Acting-wise he played the CEO Bob in the movie “Dark Fantasy”, directed by Ian J. Keeney; as well as the Mafia boss Don Barbetta in the feature “Break a Leg”, directed by Monika Mitchell. Dominick appeared in a National Geographic Documentary “Inside The Mafia”, played the Locksmith in “The Insideman” with Denzel Washington, and impersonated a NYC Police Sergeant in “Pride and Glory” with Colin Farrell. In that same manner, he has also been featured in “The New York Post”, “Stuff Magazine”, and most recently in a “New York State Lottery Commercial” (BA-DA Bling).