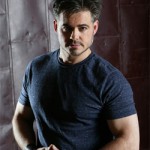 Galway moved to NYC from Minneapolis in the fall of 2003, and hit the ground running. Less than 24 hours after his arrival he began his first fight choreography gig in the city. He has been studying, performing, choreographing, and teaching Staged Violence since 1992. Just one year after, he was awarded the Best Male Actor Combatant Award/1993 at the National Stage Combat Workshop. He has choreographed/coordinated the violence for over 50 on-camera and theater projects.

Some career highlights include “The Tragedie of MacBeth” for The WorkShop Theater, getting beheaded at the 2010 Cannes Film Festival in the opening sword fight sequence of “The Crimson Mask” (which garnered over 40 festival awards including 2 for Best Stunts), he has worked on the ABC hidden camera show “What Would You Do?”, had his work featured on the Yahoo home page for National Talk Like A Pirate Day and has been even interviewed by BBC Radio about his profession and craft. Galway is also a partner of Combat Inc: www.combatinc.com.