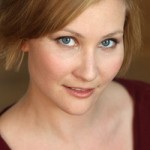 Heidi Lange has been an active performer for over ten years so far. Upon moving from her hometown in Arizona to New York City, she obtained her B.A. on Liberal Arts in 2011 from The New School, legendary progressive university located in Manhattan, where she received extensive and comprehensive training on theatre and film studies.

As a postgraduate, Heidi has been fortunate enough to find steady work in and around New York as an actor on various independent projects and films; while she also continues resolutely her formal theatre training. At this point in her life she has been thrilled and grateful to be working on such a great project called “CIRCLE”, as well as willing to further pursue her acting career.