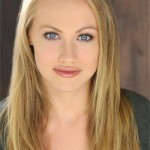 Kelsey Deanne was born in Fort Worth, TX and moved around during her childhood to Houston, South Dakota, and the Bay Area, CA. Growing up she was heavily involved with piano, dance, band (drums and oboe), road cycling, and competitive running. After graduating from Burlingame High School one year early, she attended Lawrence University’s Conservatory of Music in Appleton, WI on a piano performance scholarship. She switched majors to anthropology, joined the Cross-Country and Track teams, and earned a B.A. in three years. She continued to earn two M.A. degrees in anthropology from University of North Texas and The New School (NYC). After piano and anthropology didn’t quench her thirst, she moved to New York to pursue her real passion – acting. After three years of guns blazing, her resume includes a co-star role in a NBC web pilot “Harbors”, lead in SyFy’s “School Spirits”, lead and supporting roles in three Discovery ID shows, and now the role of Brandy in “CIRCLE”.

In regards to how Kelsey made the seamless leap from anthropology to acting, she says“Anthropology and acting are very similar in regards to their never ending pursuit of what it means to be human: behavior that can be both calculable and enigmatic simultaneously. However, while anthropology tries to view human behavior through an objective lens, acting is subjective – as actors we share ourselves and others’ lives through vulnerable, carnal emotions and phsyicalities. It’s a lot more powerful to visually experience human behavior than it is reading about it”. In her free time, she enjoys running in Central Park with her Doberman Pinscher (Onyx), completing puzzles, reading voraciously, and exploring NYC with her husband, Frederik.