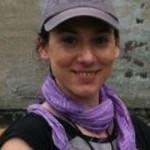 Maria Cabra is an Italian freelance photographer and cinematographer based in New York City. She attended Politecnico di Milano in Italy and has a degree in industrial design, focused in fashion. She has worked with Silvia Gavina developing the concept of  VIA.gg.IOproject, beauty brand. She attended a Technical Photography course at “Forma” International Photography Center in Milan, Italy; where she started as a follower under the expertise of Maurizio Montagna, an art photographer who became eventually her photography Master. She then made researches in lighting and films stocks as an independent photographer.

Now Maria is mainly shooting as an AC and has just finished the production of the feature film “In the Summer Pavilion” directed by Paul David Young, and cinematography by Vitaly Bokser. Besides, she shoots low budget short movies as a cinematographer, or works in fashion shooting backstage for “Twelv” magazine.