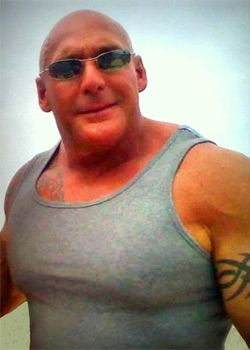 Pat Antonecchia has built an unequaled reputation in the industry of competitive athletics, result of over 25 years of professional competition as a World Class Strongman and a National Champion Weightlifter. Although he has now retired from professional competitions, Pat is currently being cast in many different acting roles in films, commercials and documentaries.

His most recent work Includes: playing a Gotham City Policeman in the latest “Dark Knight” movie, a Demon in the psychological thriller “Purification”, was the ‘Biggest Inmate’ in the film “Inside”. He played a Bouncer in the feature film “Wifed Out”, a Mob Enforcer for the feature film “Zarra’s Law”, and plays a ‘Blue-Eyed’ Gangster in the short-film “A Tinsmith”. He is the Featured Performer in the current Vitamin Water commercial, and has been modeling Men’s X-Large Clothing for I-Model of London. Pat had a Supporting Role in the feature horror film called “Apex Rising”, played Bruno in the short-film “Crashpad”, also Grim Reaper in the feature horror film “The Library”, and impersonates a ruthless Mobster Bodyguard in this short-film “CIRCLE”.

Pat holds the World Records for the 40,000 lbs Truck Pull and the 10,000 lbs 2-Man Truck Lift. As a National Champion Powerlifter, he was the Strongman Champion in the Battle of the Titans, Runner Up in John Wooten’s New World’s Strongest Man Competition and Runner Up at North America’s Strongest Man Championship. Pat was the United States Representative at the Strongman Championships in Europe and Canada, winning Runner Up in the Canadian Strongest Man Competition. He holds a degree from Wilkes University and was a spokesperson for Vita Pro and Strength Systems USA supplement companies, which included participation in ten international productions. Pat currently resides in the Hudson Valley, NY area; while he keeps expanding his horizons in the acting and entertainment field.