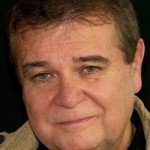 Perry Ford, quite new to the acting scene, joined SAG after working in the movie “Man on a Ledge”, psychological thriller shot back in 2010. He had his first principal role this past year 2012 as a Fire Marshall in the new TV show “Elementary”; and also will be appearing in the soon to be released CBS TV show called “Golden Boy”, where he impersonates a NYC Police Lieutenant.

Perry is originally an accomplished bassist. Early on he toured for ten years as a bass player for Joe Cocker; and also regularly toured with the Pointer Sisters, Southside Johnny & The Asbury Jukes, Anita Baker, as well as Gladys Knight & The Pips. Born in New Jersey, further on in time he made Jersey Shore his home. At these days he plays for pleasure locally in NJ and also in and around NY with some of his many still famous former band-mates when he is not busy acting.