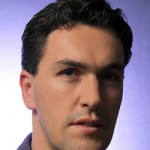 Born in Rouen, France; Stephane spent his childhood among the fascinating merchandise of a big electronics warehouse store owned by his family. He spent 2 of his teen years in St. Martin Island to then move back to France; where he studied art and philosophy, entered the Plastic Art Studio, and was admitted at the École Nationale Supérieure des Beaux-Arts de Nancy.

In 1996, Stephane moves to the US, at North Adams, MA; starting from an internship at Kleiser Walczac Construccion Co, to then keep going as a production assistant, office manager, director assistant; all while learning the world of animation /3D during 5 years with some of the best animators, directors and producers of the time. Soon came the opportunity to work on commercials, 3D amusement park ride for clients such as Universal Studios, Busch Gardens, Radio City Music Hall, also on the features films “X-Men”, “X-Men II”, “Carrie 2”, and “The One”. Besides, he even dedicated time to teach Photoshop, Digital Photography, and Introduction To Arts for kids in Art schools in MoCA area, Mass. In 2007 he moves to NYC to fully pursue his career in the movie business. While still working in garment design he studied directing, cinematography and production design at the School of Visual Arts. Along this process Stephane has found himself working passionately on varied music videos, zombie movies, sitcoms, commercials; plus definitely multiple exciting projects keep coming on his plate.